By Lion Kathy D. August 30, 2013
“Is anyone interested in going to Mozambique?” asked Henry for at least the 50th time.

“We have 4000 pair of glasses there waiting to be distributed, and no one to do it.”

Thus started our journey to a country situated on the Southeast coast of Africa inhabited by people who speak Portuguese and Macua, but very little English.  This story actually started 3 years prior when Tom Porter, a volunteer for Mission Aviation Fellowship (MAF),   gave a presentation at the Boise Bench Lions meeting.  There, he met Henry Cardinale, who sorts and distributes glasses for the Idaho Lions Eye Bank and eventually a shipment of glasses was sent to the MAF base in Nampula, Mozambique.  However, they’d been sitting in storage there for nearly 3 years.

Having a love for travel and adventure, we decided this trip would be a great way to celebrate our relatively new status as retired persons.  So our preparations began.  The letter of invitation necessary to apply for visas was procured after much correspondence with Dr. Pim, the resident physician at Mission Marrere where we would be working.   A visit to St. Luke’s travel clinic yielded  shots, malaria pills, and advice about dietary concerns and mosquito netting.   Jay Lugo, from the Lions Eye Bank, was able to get us a much needed Plusoptix machine, and our friends, Dr. Pressman  and Angie Qualman from Lens Crafters, instructed us and made detailed notes on sorting glasses.

After 2 months of preparation, and many hours of travel with a diligent eye on our precious PlusOptix, we arrived in Nampula on Wednesday, April 17th, ready to begin our mission.  We were met at the airport by Dr.Pim’s family and transported the 18 kilometers to our guesthouse on the Mission Marrere property close to the hospital.  There we met Miguel who would shop for us, cook, do our laundry, and ultimately, become our friend.  We visited the hospital that afternoon only to find that most everything had closed at 2 p.m.  This reminded us of Dr. Pim’s advice, to relax and accept whatever came, because things happen on Mozambique time.

The following morning we met Irma Maria, the small but feisty Italian nun who almost single handedly manages the Marrere hospital. After struggling through various attempts at greetings in English and Portuguese, she was kind enough to assign us an interpreter, named Ilda, whose patience and kindness got us through the next few weeks.  Ilda, a midwife by profession, spoke 6 languages, and said she had delivered up to 40 babies a day. 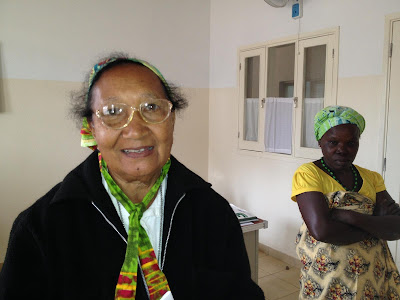 We spent our 1st day unpacking and sorting glasses, helped by various hospital aides, dentists, and other curious people who stopped by.  We soon learned that the glasses had to be marked on the outside of the individual bags in order for the prescription to be read easily.  Luckily we had brought markers, a knife, and tape from home as we discovered there were very few supplies available, and what we had would disappear rapidly if not kept in hand.  Dan cut up the dusty cardboard boxes that stored the glasses, taped them, and made bins for the newly marked ones.  The temperature was around 96 degrees and we had no air-conditioning, just fans, but despite the heat we worked late because the Eye Technician, Aleluia, was determined to start screening people the next day.

Each morning thereafter we were greeted by a crowd of 50-75 people eagerly waiting to be screened and hopeful of receiving glasses.    The crowd would grow incredibly during the day, prompting our friend and maintenance man, Mr. Blue, to create a numbering system to avoid general chaos.   We quickly learned that by working through lunch time we didn’t lose our helpers, and despite frequent power outages Dan was able to screen between 70-100 people a day.  The Plusoptix machine looks like a radar gun;   you point it at a person’s eyes, and it registers their prescription on a computer screen adjacent to it. This was by far less time consuming than the traditional way that Aleluia screened people, and many of our patients thought it was magic.  But because the machine can’t read a person’s eyes if they have cataracts, have had eye surgery, or other eye problems, he referred about 1/3 of our screenings to Aleluia for further testing.  We were able to match some prescriptions quite closely, but discovered   that most people in this area are far-sighted and can benefit most by having simple readers and sunglasses.   When we realized that we would have many non-usable glasses because of the prescriptions, we started disassembling them, taking out the lenses, and giving away the frames.  We were told that frames were very costly in Nampula, but that you could buy prescription lenses reasonably. 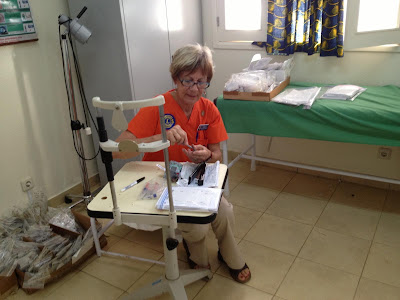 We were determined to leave good records for the Hospital administrators so Dan filled out a prescription paper for each person he screened and noted whether they needed or received glasses or not, or were referred for testing.   In the evenings we would rewrite all the ledgers done that day as Ilda’s hand writing was almost illegible.  Our records show that Dan screened nearly 700 people in 10 working days. 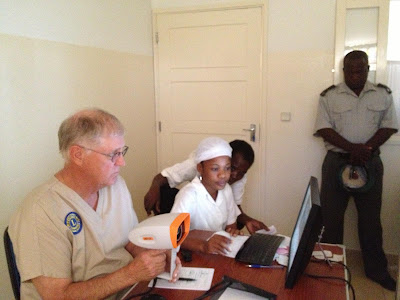 We did have time for a few hikes on the Mission grounds and came to see that most people live in simple adobe houses, without electricity, running water, or indoor plumbing.  They have vegetable gardens and many fruit trees, but rely on infrequent rains to water their crops.  The women wear colorful traditional clothing; carry babies in wraps on their backs and everything else on their heads. The men wear more western style dress, but it is very common to go barefooted.   There are usually people camped on the grounds outside the hospital, because a family member is sick and they need to stay close by to help them.

We enjoyed walking to and from the hospital every day as there is a school on the grounds and we saw children playing soccer in the dirt (also barefooted), studying under the trees, and picking vegetables on the  weekends.  Many of them spoke a little English and were happy to teach us a few Portuguese phrases.  We wore scrubs with Lions patches sewn on throughput our mission, and were glad to see that many people were curious about the insignia and wanted to know about Lions and what we do.  Presently there are no Lions Clubs in Nampula, but there are several in the surrounding countries.  This was truly an amazing experience for us and we hope that through this short mission we have helped to introduce and promote the concept of Lionism in Mozambique. 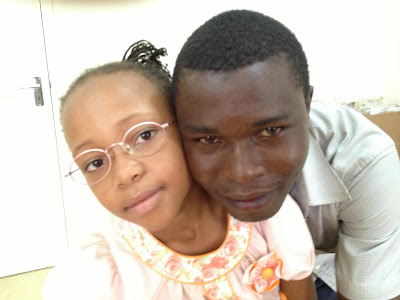