January 15th was the first day for clubs to purchase Peace Poster kits for the 2013 -14 contest.

It may seem a little early for a contest that ends in November, but by getting a kit or 2 now, you're sure to find a school or youth organization that would like to participate and give them plenty of time to prepare their masterpiece.

And there will be masterpieces!  Just take a look at some of the winners that were produced last year (2011-12).  It's truly amazing what kids from 11-13 years old can do.


Here in District 39W, we have selected a winner for the 2012-13 contest, which goes on to the Multiple District contest. The winner there is sent to Lions International to compete for one of the top 24 spots.

We congratulate our winner, sponsored by the Caldwell Lions Club. 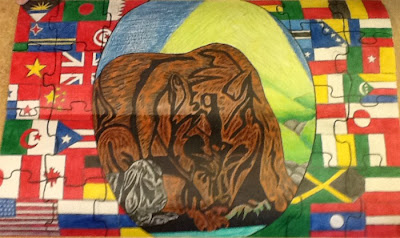 Several 39W entries will be on display at the Midwinter Convention, Feb. 8-10.  Winning posters for 2012-13 for Lions International will be announced in February.

I recently attended a meeting at a neighboring club.  The speakers were local Lions, Jonette Flores and Dana Miller from the Nampa Lions Club, talking about how they have five successful  Leo clubs in their area.  The membership in some of these clubs numbers over a hundred.

In the Leo clubs, an enthusiastic adviser, often a teacher in the school where the club is located, is essential.  Lions sponsor the club, pay some of the costs, and work with the adviser and the Leos.  The Nampa Lions Club is exceptional in that they also provide training for the advisers and also for the Leo officers.

The Leos themselves determine the service projects or fundraisers they want to do, just like in a Lions club. Dana told of one such project from a middle school group.  The Leos decided they wanted to go Christmas caroling at a local nursing home.  They went to the music department in their school, recruited singers and borrowed sheet music, then crafted favors for the residents.

Later that day, I spoke to a long time Lion member who told me, "Lions are dying."

Clubs are getting old, members are dropping out, and Lions Clubs won't be around much longer, he stated.

I beg to differ.

With hundreds of youth interested in serving their communities?

When these young people are learning to serve, learning leadership skills, and finding their passion right here in our own backyard?

When many Leos go on to be Lions because of the positive experience they've had?

When we, as current Lions, have the opportunity to recruit our successors now through Leos clubs?

If Lions are dying, it's our own fault.

It's not the Lions New Year, but a new year on the calendar, so it's still a good time to review...

Where are you with your goals for your Lions club?  What?  Forgot to make goals?  If you did forget, it's not too late; you still have 6 months left in your Lions year.  Let's call them resolutions...and I'll make a few for you...

1.  Resolve to get ___ new members by June 30th.  You fill in the blank with the number that is achievable, yet a bit of a stretch, for your club.

2.  Invite ___ new people (preferably friends and acquaintances) to your meetings or projects.  If they don't know what you're doing, they probably won't join. (See #1)

3.  Network (that just means visit, nothing formal) with ___ other clubs.  The by-product here, is making new friends.  We can all use those.  The ulterior motive-you'll know who to call if you need some help on a project.

4.  Plan something for your club that is just for fun.  Purely for fun.  Not to raise money, not a new project, not to sit at another meeting.  Just get everyone together and go have some fun.  The bonds you make in friendship will strengthen and energize your club.  (Just don't be cliquey, include everyone.)