Just being a little corny

Boise Capital Lions Club would like to introduce you to their new endeavor-they call it "Corn Toss".  Also known as "Cornhole", this game consists of throwing bags filled with corn toward a platform 30 feet away and trying to land the bag in a hole in the platform.  Rules are similar to horseshoes, with 3 points scored for a "cornhole" and 1 point scored for an "ace", or a bag that lands on the platform.  Apparently Corn Toss is most popular in Kentucky, Illinois, and Cincinnati, with each area claiming its origination. 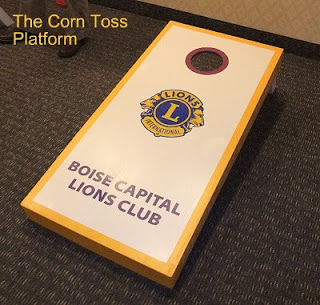 Now it's in Boise, Idaho, and the Capital Lions are having some fun with it.

Introduced at their Charter Dinner last night, the Lions were having some fun trying out the game.  They'd like other Lions Clubs to play and would like to eventually have Lions tournaments.  They also hope to have other groups use the games at barbecues and picnics (it's best played outside as a lawn game) as a club fundraiser or club sponsored event. 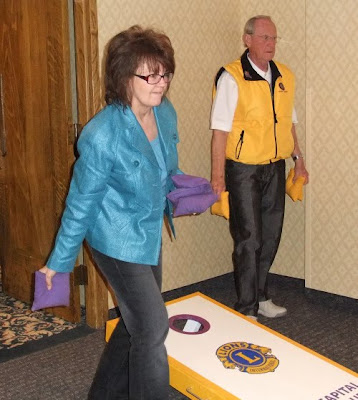 If you want more information about the game, contact PDG Lion Laura or any member of the Boise Capital Club.

Will Corn Toss catch on?  What do you think?
Posted by The Lions at 11:08 AM No comments:

Winning at basketball and fundraising

Where were you Saturday night?

I know where you weren't!  You weren't at the Idaho Stampede basketball game supporting the Leos with their "no brainer" fundraiser.  But then, neither were the Leos.  I don't really get it.  With almost no effort, nearly $150 was raised for Leos projects.  Think what could have been raised with effort.

The Idaho Stampede is a D-League basketball team affiliated with the Portland Trailblazers and the Denver Nuggets in the National Basketball Association.  The D-League is the official minor league of the NBA where top prospects come to hone their skills.  At the end of the 2008-2009 NBA season, 20% of the  players had D-League experience.  Even if you're not an NBA fan, just marveling at the size and speed of these athletes is worth the price of a ticket!

But if basketball is just not your thing, the Idaho Stampede is still an organization that deserves your attention.  Established in 2003, the Stampede Community Foundation gives back to the Boise community through basketball clinics and reading programs for youth,  a partnership with Bank of the Cascades and Make a Wish,  programs for our military, and many other hands-on projects and donations.

So back to the no-brainer fundraiser:  The Idaho Stampede discounted the price of the tickets for Leos to sell, then donated half of that back to the Leos.  It helped the Stampede by putting bodies in the seats, and the Leos by putting money in their treasury.  A win-win.  (And a winning night for the team as well, defeating the Tulsa 66ers 110-95.)

Will the Lions and Leos try this again next year with a better result?  I hope so!  The Idaho Stampede has not only a lot to offer the community but our organization as well.  We should take advantage.
Posted by The Lions at 9:36 AM No comments:

Less than two weeks remain to enter Phase 2 of the Lions 39W photo contest.  Lions can submit photos of Lion events and activities that took place between January 1 and March 31, 2010.  The contest judge (that's me!) is looking for good photos taken by Lions or Leos that show Lions or Leos engaged in service projects, fundraisers, or other community events.  You can find what few rules there are on our website under "contests". Really good photos (and even some not so good) may find their way onto our website, this blog, or facebook.

Here are a couple random favorites of mine: 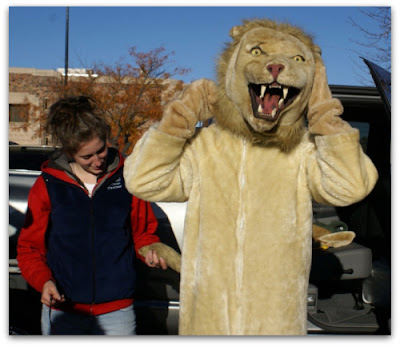 "Ouch!  That's my tail!"  Taken at the Veterans Day Parade in downtown Boise. 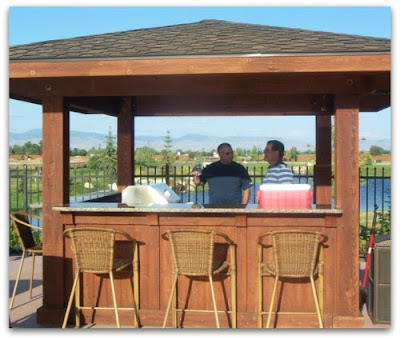 "What do you mean, the burgers aren't done?"  1st VDG Pat in July in deep conversation with a Star Lion. 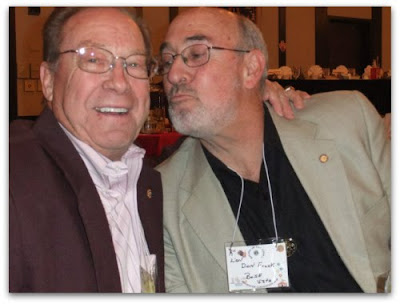 Vista Lions hamming it up at the 39W convention.
Posted by The Lions at 4:08 PM No comments:

Saturday in Cascade, twenty-six volunteer Lions and friends put in over 100 total hours at the Idaho Special Olympics Winter Games to screen the eyes of 98 athletes. Just over half of the athletes received new glasses or updated prescriptions and another 30 plus scored a pair of new sunglasses. Wow! 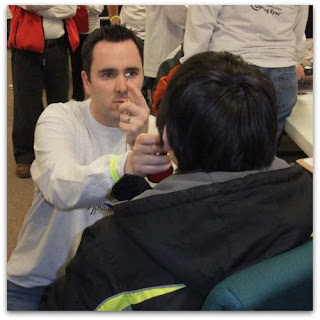 If you've never volunteered at this event, you are missing an amazing experience.  It may look chaotic to the uninitiated as the athletes wind their way around the room, stopping at each station for various screenings and tests by the volunteers, optometrists, and ophthalmologists:  color blindness, depth perception, visual acuity, refraction, glaucoma, and more. But the room is actually very organized and humming along smoothly; all the volunteers and doctors are working swiftly to assist as many athletes as possible. 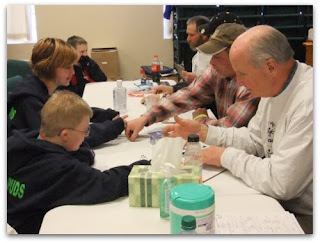 Many athletes are sporting their medals dangling around their necks; others show off their ribbons and tell you about their race or floor hockey game.  One young man speaks of his snowshoe race-he had difficulty seeing the finish line because of double vision-there were two finish lines, he says.  Another athlete isn't wearing his medals but has them in his pocket-they don't go with the sport jacket and bolo that he is wearing to the dance.  Another  ponders whether the girls will think him handsome with his new glasses. 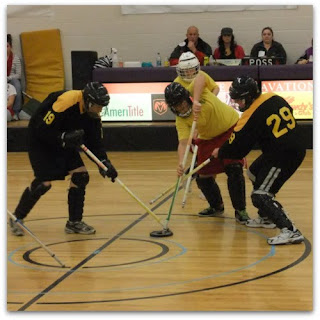 If you want to be a part of the next Opening Eyes event, contact Curt Kelley at 859-3642 and get signed up now.  The next event is in May in Boise.
Posted by The Lions at 9:36 PM No comments:

Ready for the Pro Bowlers Tour???

Meridian Noon Lions went bowling on Saturday to raise money for the Sight and Hearing Foundation and for local food banks.  Lions and Leos from several other clubs joined in for an afternoon of fun at Meridian Bowling Lanes.  At first I wished I was bowling, then I saw all the bowlers with their own balls, shoes, bags and even towels, and I was glad to be watching from the sidelines and not showing off my "skill"!   Maybe I'll practice and see you next year!

If you missed the bowling in Meridian, head out to Mountain Home on March 20th and Bowl for Sight and Hearing. 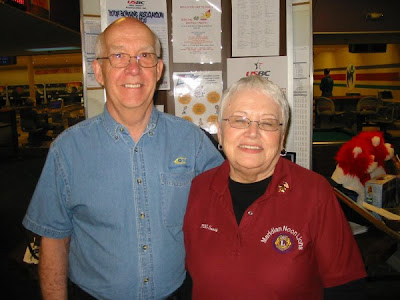 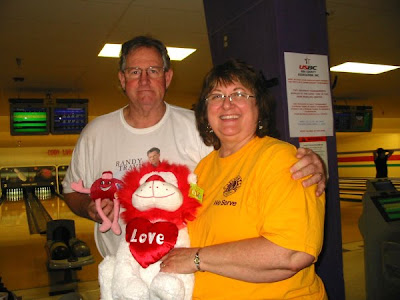 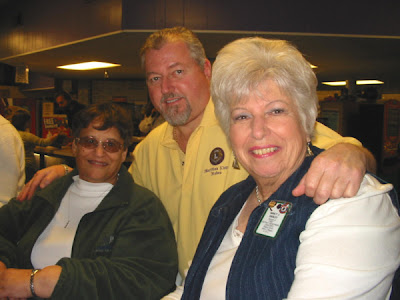 Thanks, Lion Nancy, for the photos!
Posted by The Lions at 9:11 PM No comments:

Last night I had the pleasure of attending the Women's Council of Realtors (WCR) "Casino Night" Membership Drive-this time as a guest and not a dealer!  Riverside Lions Club (with a few hands from Kuna) did a great job.  They were well-staffed and well organized and judging by the peels of laughter from the blackjack tables and the shouts from the craps tables, everyone was winning and having fun.

During the course of the evening, a few WCR members would grab the mike from the band and say a few words about the organization.  WCR is an network of  Realtors that promotes professional and personal development.  Did you you know WCR is the 12th largest women's organization in the US?  (Yes, men can be members, too.)  Several times they announced the names of the new members who had just joined.  I'm guessing they gained at least 10 new members during the course of the evening.

So why I'm I telling you about WCR?

This was a membership drive.

Lions could have a membership drive.

Are the wheels turning?
Posted by The Lions at 8:19 AM No comments:

March is Eye Donor Awareness Month and the Idaho and Eastern Oregon Lions MD 39 would like to thank the Idaho & Eastern Oregon Sight & Hearing Foundation for all the tremendous work they do in providing sight/hearing saving and restoration services.

To become a donor you can sign up at www.yesidaho.org
Posted by DG Lion Pat Brown at 11:52 AM No comments: