By Lion Kathy D. February 07, 2010
Just a year ago the Special Olympics World Winter Games were held in Boise-and in conjunction with that, the Boise Special Olympics Lions Club was born.  It's a perfect partnership-the Lions have been an official partner of Special Olympics Opening Eyes since 2000; now a local Lions Club is dedicated to raising funds for Special Olympics.  The club is unique in a couple of ways-it is the first and only special interest club in the District and the average age of the members is undoubtedly the youngest. (Both very cool!)

Anyway, when you turn one year old, you have a party!  In Lions' terms, we call them "Charter" parties, and BSOLC held theirs on Saturday night.  The "Tiki Luau" was held at Holiday Inn where whiffs of chlorine from the pool had to replace salty ocean breezes (Hey, I'm not complaining- it is winter in Idaho and we're a long way from the tropics!).  The food was great, the Hawaii shirts were tacky, the leis colorful, the bartender mixed a mean Bahama Mama, and the muumuus-well, they were muumuus. 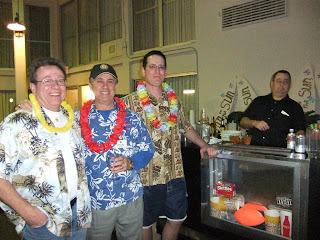 Curt Kelley was the winner (or was that "loser") of the tacky Hawaiian shirt contests-fitting, since Curt thinks all Hawaiian shirts are somewhat tacky.

The evening also included a hula dancer, some hula hooping, a brief limbo contest, and karaoke.  (Rumor has it, there is video...) 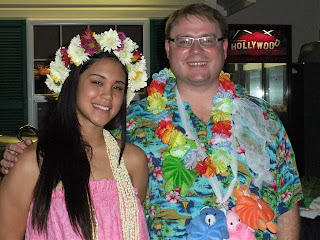 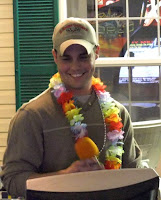 I can't begin to mention everything else about the party-suffice it to say, "You shoulda been there!"